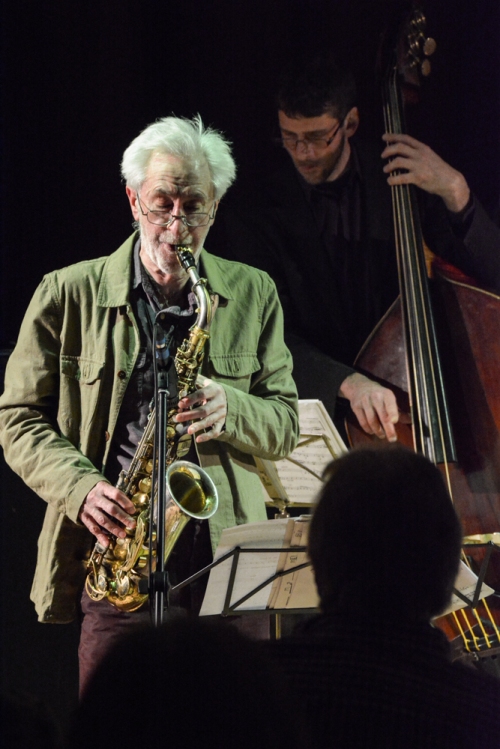 CHRIS BISCOE started working with Mike Westbrook in 1979 and has played in many of Mike’s projects including The Westbrook Blake, The Cortege, On Duke’s Birthday, London Bridge and Chanson Irresponsable. He has toured and recorded with George Russell, Andy Sheppard, Grand Union, Chris McGregor and Didier Levallet , and has worked with Hermeto Pascoal, Dewey Redman, Kenny Wheeler & the New York Composers Orchestra, co-led by Wayne Horvitz and Marty Erlich. He has also performed and recorded with Liam Noble, Ben Davis and Loz Speyer, and collaborated with Fire Collective members Ingrid Laubrock and Seb Rochford.

The Chris Biscoe Quartet featuring Tony Kofi released its first CD, ‘Gone in the Air – The Music of Eric Dolphy’ in 2008. The ‘Profiles of Mingus’ album was inspired by the small group music of Charles Mingus, and received a 4-star review from the Guardian. His most recent CD ‘Live at Campus West’ from 2012, with Tony Kofi, Larry Bartley and Stu Butterfield, features the music of both Mingus and Dolphy, and his latest project ‘Two of a Mind’, is a new band with alto saxophonist Allison Neale (who appears with her own quintet at Fleet in May).  It will be exploring afresh the freewheeling, melodic interpretations of standard material recorded 50 years ago by Gerry Mulligan and Paul Desmond on ‘Blues in Time’ and ‘Two of a Mind’.