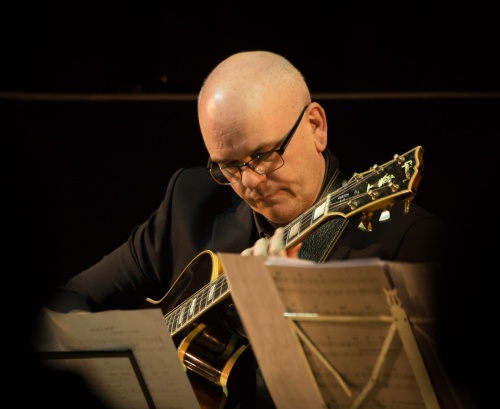 COLIN OXLEY is a class-leading guitar talent.  Born in Newcastle upon Tyne he studied at Newcastle School of Music before attending the Guildhall School in London.  Whilst at the Guildhall he won the Best Soloist award in the National Big Band competition and went on to work with some of the top performers in London including recording six albums with vocalist Stacey Kent and appearing at such festivals as Montreux, North Sea and Marciac in southern France.  In 2001 Colin was voted Jazz Musician of the Year by the Worshipful Company of Musicians.  He has also worked extensively in Japan with his wife Eriko Ishihara and produced two of her albums for a Japanese record label. Currently he can be seen leading his own groups, in duet with Martin Speake and as part of the increasingly popular John Wilson Orchestra.  He is a professor at Guildhall School of Music in London where he teaches jazz guitar.