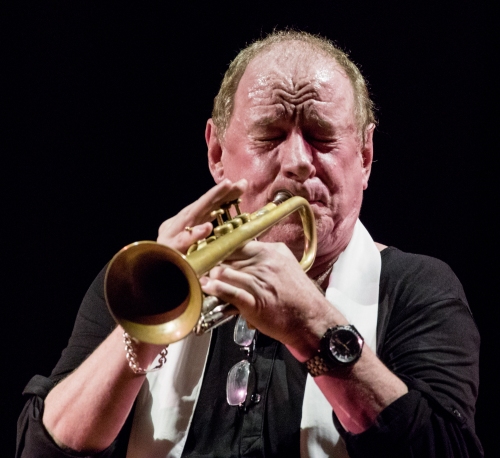 DIGBY FAIRWEATHER became a fulltime jazzman in 1977 after twelve years as a qualified librarian in Southend-on-Sea.  He worked with trumpeter Alex Welsh’s band (frequently as Welsh’s deputy) and recorded his first album with Welsh’s band in 1974.   He worked with Lennie Hastings’ band, Dave Shepherd’s All Stars, Keith Nichols’ Midnite Follies Orchestra, the co-operative quartet ‘Velvet’ with guitarists Denny Wright and Ike Isaacs, and the Pizza Express All Stars.  From 1983 he had a variety of solo projects and from 1987 led his own band the ‘Jazz Superkings’.  During the 1990s he combined playing with a good deal of broadcasting.  In 1998 he returned to fulltime trumpeting.  “The trumpet is the reason I came into jazz” says Digby ” – and that’s the way I want it to stay”.

Through the 90s, he played in various Great British & Best of British jazz bands, and formed his own ‘Half Dozen’ – his main artistic project till the present day.  Following the death of Humphrey Lyttelton, he was invited to succeed Lyttelton as the patron of the Birmingham International Jazz Festival which he has been since 2008.  The Half Dozen toured and recorded with George Melly.  Fairweather has been a prolific author , and has garnered numerous awards.

His honours include ‘BBC Jazz Society’s Musician of the Year’ (1979) and Freedoms of both London (1992) and his hometown Southend-on-Sea (in their ‘Millennium Roll of Honour’ 2000).  In 2013 London’s ‘Worshipful Company of Musicians’ presented him with their ‘Lifetime Achievement Award’ for ‘Services to Jazz’– ‘a tremendous privilege’ says Digby.  He is currently President of ‘Ongar Jazz Club’.  In 2009 as Founder of the National Jazz Archive he was presented with a ‘Special Award’ in celebration of the their twenty-first anniversary.  In 2015 Digby received the British Jazz Award (the ‘Jazz Oscars’) for ‘Services to Jazz’.  Today, after almost forty years in professional jazz, he continues to lead his beloved Half Dozen and ‘Premier Quartet’, sells out Ronnie Scott’s with every appearance and also plays solo concerts for clubs and jazz festivals countrywide.