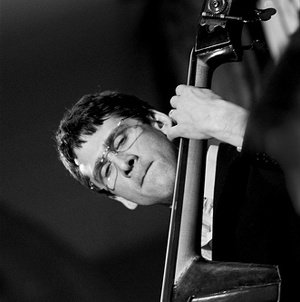 JEREMY BROWN studied at the Royal Academy of Music and is now one of the leading bass players in the UK.  He has been a regular member of the Peter King Quartet (with Stephen Keogh and Steve Melling) and of Gerard Presencer’s ‘Platypus’, and has worked with top musicians such as Louis Stewart, Johnny Griffin, Art Farmer, Mornington Lockett, Brad Mehldau and Mark Turner. In 1995, he was featured as the bass player on Julian Joseph’s live TV broadcast from the Summer Proms. He has also appeared in Julian Siegel’s quartet ‘city of dreams’ with Gary Husband and Liam Noble and the Christian Garrick Quartet with Dave Gordon and Tom Hooper. He has supported Benn Clatworthy with Robin Aspland and Martin Drew and appeared in The Kate Williams Quartet, Christine Tobin Quintet and Alyson Cawley Quintet. He is also a member of the innovative band Respectable Groove, with Evelyn Nallen, David Gordon and Ichiro Tatsuhara.